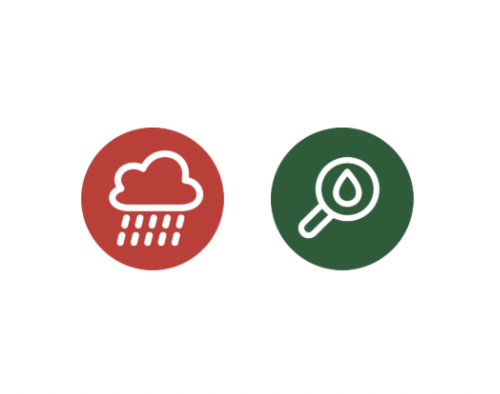 Deteriorating water quality and resulting water shortage is an ongoing threat to the sustainability of domestic water supplies on Tutuila, the main island in the territory of American Samoa. The water quality issue manifests itself in two different ways: contamination from human pollutants and groundwater salinization from saltwater intrusion. Since groundwater is the source of 99% of the islands drinking water a clear understanding of the potential contamination sources are of utmost importance for long-term management of this resource for the island’s ~60,000 residents. Pollution from anthropogenic activities such as on-site disposal systems, small-scale pig rearing operations, and residential agricultural plots have long been suspected as the cause of increased nitrate concentrations and bacteriological pathogens in groundwater. There are other possible indicators of anthropogenic pollution such as trace metals, redox sensitive elements, and stable isotopes of nitrogen in nitrate and carbon in dissolved inorganic carbon. The analysis of spatial distribution of these geochemical parameters allows us to identify potential source areas of anthropogenic pollution. We used the spatial distribution of lead, copper, and chromium to show that there is a strong correlation between these heavy metals at low levels and they may be sourced from erosion of natural deposits. Lead, however, showed enrichment in 3 wells in the Tafuna Plain that was attributed to anthropogenic contamination, albeit at very low, nM levels. Spatial patterns of redox sensitive vanadium, uranium, and molybdenum showed a strong correlation with nitrogen concentrations in wells suggesting that the nitrogen source also introduces organic matter to the aquifer and affects is oxygen levels and redox chemistry. In total we worked with over 40 geochemical signatures and our study revealed interesting patterns of contamination sources as well as geological variation in aquifer materials. This latter finding may help water resource managers in understanding the interconnectivity of individual aquifers.

Another missing infrastructure on the island was a spatially well-distributed weather-gauging network that could measure all the required data for precipitation and evapotranspiration. To address this gap, we established a weather station network in cooperation with American Samoa Power Authority and Community College. Six climatological monitoring stations with the capabilities of monitoring temperature, relative humidity (RH), solar radiation, wind speed and direction, and rainfall were deployed in 2015. These stations were distributed across the island in locations to best characterize spatial gradients in climatological patterns as well as elevation gradients.